Dr Charlie Colbourn awarded the 2019 Stanton Medal of the ICA

Dr. Charles Colbourn has been a tireless lifelong champion for the discipline of combinatorics, with his efforts especially focused in the design theory community.

He was instrumental in the founding of the Journal of Combinatorial Designs (JCD), which filled a void that had existed in the journal landscape prior to its inception. He has served as one of the editors-in-chief of JCD since 1993, and has promoted it to be the flagship journal of design theory and a highly respected journal throughout the mathematics community. He also serves in an editorial role on a large number of other journals in combinatorics and related fields including Designs, Codes and Cryptography, Journal of Combinatorial Theory Series A, Discrete Mathematics and Networks. He was the co-editor (with Jeff Dinitz) of the first (1996) and second (2006) editions of the Handbook of Combinatorial Designs, now widely considered to be an indispensable reference by researchers in design theory.

Dr. Colbourn is a great advocate for design theory and combinatorics. He attends a huge number of conferences in a wide variety of fields, very often as an invited speaker, and always makes a compelling case for the importance of design theory to the relevant field. He has provided invaluable mentoring for a great many young combinatorialists who have developed into active members of the combinatorics community. He chaired the Medals Committee of the ICA from 2016 to 2019, during which it awarded medals for the 10 year period to 2019; this service was a vital part of reinstating the ICA on a solid footing. 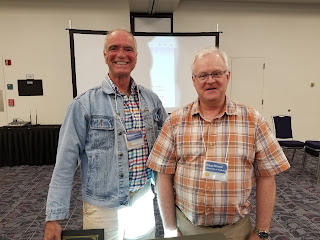 Photo of Colbourn and Stinson, March 2019.