Showing posts from June, 2020
Show all

Dr Koen Thas awarded the 2019 Hall Medal of the ICA

June 25, 2020
Dr Koen Thas awarded the 2019 Hall Medal of the ICA Hall Medals  recognize  extensive quality research with substantial international impact  by Fellows of the ICA in mid-career. Dr Thas earned his PhD in 2002 from the University of Ghent under Hendrik van Malgedhem while acting as a Research Assistant of The Agency for Innovation and Entrepreneurship in Flanders, Belgium.   Subsequently, he held a position as a Postdoctoral Research Fellow of the fund for Scientific Research at FWO in Flanders, Belgium.   As of 2010, he is a Professor at Ghent University in the Department of Mathematics. Koen Thas has made significant contributions in the areas of finite geometry and absolute geometry, and has addressed important problems in mathematical physics and quantum information theory using geometric and group-theoretic methods. He has solved a number of fundamental open problems by eminent researchers. His classification work in the theory of generalized quadrangles has been de
Post a Comment
Read more 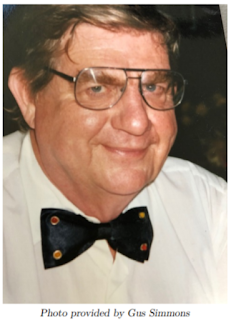 Dr Entringer earned his Ph.D. at the University of New Mexico in 1963 with Dissertation: Some Properties of Certain Sets of Coprime Integers under Joerg Werner von Peter (Kalkschmidt) Mayer.   He was Professor Emeritus at the University of New Mexico, having supervised six students during his time there, Curtis Barefoot, Joseph Barr, Lane Clark, Charles Harner, Joe McCanna, and Tom Porter. Swart spent a sabbatical leave at the University of New Mexico, Albuquerque, New Mexico, USA. She attended the graph theory lectures delivered by Roger Charles Entringer in which he handed out a set of open questions to the class. Swart thought that these were exercises for the class and attempted to solve them but was surprised to find that she could not solve some of them. Entringer was, however, very impressed with the progress that she had made and this led to a joint publication by Swart and Entringer, Spanning cycles of nearly cubic graphs (1980). The date on this paper is slightly
Post a Comment
Read more