Showing posts from September, 2019
Show all

Dr Claude Berge awarded the 1993 Euler Medal of the ICA

September 26, 2019
EULER MEDALS FOR 1993 In announcing the Euler Medallists for 1993, a reminder about the qualifications for the Medals is in order. Up to two Euler Medals per year may be awarded. A recipient must be a Fellow of the ICA and must have made a particularly distinguished lifetime career contribution to research in Combinatorics; the Euler Medal is not meant to recognize one specific achievement. Furthermore, a recipient should still be active in research. By majority vote of the ICA Council, 1993 Euler Medals have been awarded to Claude Berge, one of the world's most distinguished graph theorists, and Ronald Graham, a research combinatoricist of enormous breadth, depth, and influence. Members of the ICA may be interested in the extremely brief summaries of their research careers that follow. Claude Berge . Born 5.06.1926 at Paris, PhD, University of Paris, 1952. 1952 Research Associate, National Centre for Scientific Research (C.N.R.S., Paris). 1956-57 Visiting professor, Uni
Post a Comment
Read more 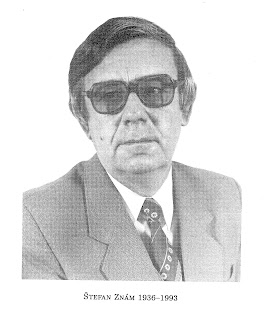 From BICA (10) 1994 STEFAN ZNAM 1936-1993 Alex Rosa, J. Siran Štefan Znám, Professor of Mathematics at Comenius University in Bratislava and a leading Slovak graph theorist and number theorist, passed away suddenly July 17, 1993. After obtaining his first degree in mathematics in 1959, Štefan Znám started his scientific career working in number theory. His results on covering systems of congruences have become a classic. Later in the sixties, partly through working on Zarankiewicz's problem, he became more and more interested in graph theory which was at the time becoming a rapidly expanding discipline. His main interest was in extremal problems, but very soon he was contributing substantial papers in other areas, such as graph decompositions. He was an author or co-author of well over 50 original papers· on these and various other subjects. Several of these papers, including one which settles completely the spectrum problem for maximal partial Steiner triple systems, are
Post a Comment
Read more

September 12, 2019
From BICA (9) 1993 1993 Annual General Meeting of The Institute of Combinatorics and its Applications The 1993 Annual General Meeting of the Institute of Combinatorics and its Applications took place at 8:00 p.m. on Wednesday, July 7, in the Westminster Theatre of Keele University, during the Fourteenth British Combinatorial Conference. Since the Conference organizers had graciously scheduled the meeting into the Conference agenda, there was a large attendance of members of the ICA, as well as additional visitors. Professor Ronald Read, from the Council of the Institute, took the chair. Financial Report for the Year 1992 . This report was presented by Professor R.G. Stanton. The Financial Report was accepted (motion by Nash-Williams, seconded by Grannell). A copy of the report is appended to this account of the AGM. Report on Activities of Executive and Council . Professor Read spoke from the Chair, and pointed out that most of the activities of the Executive and Coun
Post a Comment
Read more

In memoriam Bruce A Anderson

September 05, 2019
From BICA (8) 1993 Bruce A. Anderson May 11, 1939—May 5, 1992 P.A. Leonard Department of Mathematics, Arizona State University Tempe, Arizona 85287-1804, USA Bruce A. Anderson, a Foundation Fellow of the Institute of Combinatorics and its Applications, passed away on May 5, 1992, after an illness of two months. His death brought the loss of a valued contributor to combinatorial mathematics. This note is a brief summary of his life and work. Bruce was born May 11, 1939, in Bismarck, North Dakota. He completed his B.A., M.S. and Ph.D. degrees at the University of Iowa. His supervisor was Steve Armentrout, a topologist in the tradition of R.L. Moore. In 1966 Bruce joined the Department of Mathematics at Arizona State University where he spent his entire career. When he arrived, the department had an active group of general topol-ogists, and Bruce continued his research and directed his only Ph.D. student in that area. Throughout his career he was an exponent of the R.L. Moore
Post a Comment
Read more
More posts