Showing posts from August, 2019
Show all

August 29, 2019
From BICA (7) 1993 Harary Honoured by Exeter Honorary Degree Oration, delivered by the Public Orator, Professor Christopher Holdsworth, at the University of Exeter on the afternoon of 17 July, 1992. Citation of: Frank Harary for the Degree of Doctor of Science, honoris causa Frank Harary, Vice-Chancellor, is here today not because he is a distinguished person with close links to the West Country-he has often visited the University and given seminars here-but because of his stature as a mathematician. He is recognised as the world authority in Graph Theory, a branch of Pure Mathematics, a mystery which I shall try to elucidate in a moment. When I do I shall largely depend upon words which he was good enough to send to me, because I was unable to follow usual practice and visit him: since I did not ~ink that you would have responded cheerily if I had put m an expenses shp to travel out to the State University of New Mexico where he is at present Distinguished  rofessor of
Post a Comment
Read more

August 22, 2019
From BICA (6) 1992 Memorial Resolution of the Faculty of the University of Wisconsin-Madison Faculty Document 944 * On the Death of Emeritus Professor Richard H. Bru ck Richard Hubert Bruck, Emeritus Professor of Mathematics, died in Madison, Wisconsin, on December 18, 1991, just eight days short of his seventy-eighth birthday. He is survived by his wife Helen. Dick was born on December 26, 1914, in Pembroke, Ontario, Canada. He earned a B.A. in 1937, M.A. in 1938, and Ph.D. in 1940, all at the University of Toronto. His Ph.D. dissertation was supervised by the famed algebraist Richard Brauer. After teaching two years at the University of Alabama, Bruck moved in 1942 to the University of Wisconsin-Madison, where he spent the rest of his-career. From 1967 until his retirement in 1985, he held a Distinguished Research Professorship. Dick was a versatile scholar and a person of great intellectual depth. He was a giant in the field of projective geometry, as well as the lead
Post a Comment
Read more

August 15, 2019
From BICA (6) 1992 1992 Annual General Meeting of The Institute of Combinatorics and its Applications The 1992 Annual General Meeting of the Institute of Combinatorics and its Applications took place at 4:40 p.m . on Thursday, June 4, in the Kirsch Auditorium of Western Michigan University, shortly before the evening banquet of the Seventh International Conference on Combinatorics, Graph Theory, and Algorithms. Since the Conference organizers had graciously scheduled time for the meeting into the Conference agenda, there was a large attendance of members of the ICA, as well as a few additional visitors from the Conference. Professor Walter Wallis, as a member of the Council of the Institute, took the chair. Financial Report for the Year 1991. This report was presented by Professor Bert Hartnell. Glen Whitehead asked for clarification as to whether or not there was a loss for the year. At the request of the Chair, the Registrar explained that the ICA Inc. showed a loss of $
Post a Comment
Read more

August 08, 2019
From BIC (4) 1992: Report from the Registrar A Retrospective Glance at Membership. When we started enrolling members in The Institute of Combinatorics and its Applications in late May of 1990, we aimed at reaching 100 members by the end of 1990. We reached that target with plenty to spare! The enthusiasm that greeted the Institute has been enormous; we surpassed our original goal, and the Institute is still growing. Thanks for this achievement go to all those members who contributed lists of nominees; this is especially useful in the case of nominees for Associate Fellowship and Graduate Membership, where the nominees are in the early stages of their careers in Combinatorics. Geographic Distribution of Membership . The following tables give the distribution of our membership as of January 10, 1992. We are making a slight change to the form of this listing. In response to various requests, we list all countries represented, even when there is only a single member. This may help us
1 comment
Read more 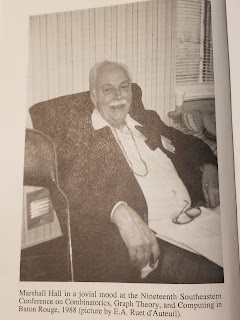 The letter of invitation to Marshall did not reach him before his death, so he was unaware of the nomination.  His memorial appeared in BICA (1) 1991 The Marshall Hall 80th Birthday Conference This conference was held at the University of Vermont from September 13-19. Originally intended as a birthday tribute to one of the greatest of contemporary combinatorialists, the conference became a memorial conference after Marshall died in England on July 4. Marshall Hall Jr. was born on September 17, 1910 in St. Louis, Missouri. He completed his B.A. in 1932 at Yale University and won a Henry Fellowship which enabled him to spend a year at Trinity College, Cambridge working with P. Hall, H. Davenport and G. H. Hardy. This was the beginning of his lifelong association with Cambridge and Oxford, two universities he often spoke of with affection and which he would happily visit many times. In 1936 he completed his Ph.D. at Yale, writing on Linear Recurring Sequences under the supervi
Post a Comment
Read more
More posts