Showing posts from April, 2017
Show all

April 27, 2017
After a one-year recess the Cumberland Conference is back for 2017.      The 29th Cumberland Conference will take place at Vanderbilt   University in Nashville, Tennessee, on   Saturday   May 20th   and   Sunday   May   21st, 2017.  Please see our website:            https://my.vanderbilt.edu/29cc2017/ * Featured speakers:        Daniel Král, University of Warwick, United Kingdom        Daniel Cranston, Virginia Commonwealth University        Dana Randall, Georgia Institute of Technology        Laura Sanità, University of Waterloo, Canada * Contributed 20-minute talks on all areas of combinatorics and graph   theory and associated areas of computer science are welcome.  In   particular, the conference will have a special focus on graph colorings,   and we encourage talks on that topic, which will be scheduled in a   dedicated session. * Deadlines: Support is being provided by the US National Science   Foundation, and requests for travel support will be given
Post a Comment
Read more

April 20, 2017
https://canadam.math.ca/2017/ The 6th biennial Canadian Discrete and Algorithmic Mathematics Conference (CanaDAM) will be held on June 12-15, 2017 on the Toronto campus of Ryerson University. Previous CanaDAM Conferences were held at   Banff in 2007 ,   Montréal in 2009 ,   Victoria in 2011   St. Johns in 2013   and   Saskatchewan in 2015 The general theme of the conference is the theory and application of discrete structures. Its goal is to highlight the most salient trends in the field, which has close links to such diverse areas as cryptography, computer science, large-scale networks and biology. The conference will bring together researchers from the various disciplines with which discrete and algorithmic mathematics interact. Particular areas of interest are the following: graphs and digraphs, hypergraphs, matroids, ordered sets, designs, coding theory, enumeration, combinatorics of words, discrete optimization, discrete and computational geometry, lattice point enumeration
Post a Comment
Read more 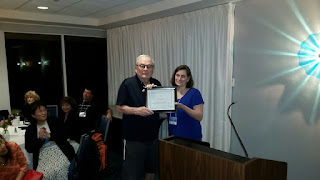 Forty-five years ago, Curt Lindner surprised the combinatorial community by finding a small embedding for partial Steiner triple systems, turning a complex mystery into a simple truth.  Ever since, in over 200 refereed journal papers and through numerous invited and keynote lectures, he has made apparently complex problems much more approachable.  His research began with embedding problems, but now encompasses a broad sweep across combinatorial design theory, especially cycle systems and graph designs.   Curt has mentored more than 20 PhD students, and collaborated extensively with international colleagues.  As his nominators say, “Curt is a catalyst” with his “captivating way of encouraging others to join him in mathematical exploration.”
Post a Comment
Read more