Showing posts from November, 2019
Show all

November 28, 2019
From BICA (15) 1995: The 1994 Euler Medal of the ICA The Euler Medal of the ICA provides recognition for a distinguished lifetime career contribution to combinatorial research by a Fellow of the ICA who is still active in research. The 1995 Euler Medal has been awarded to Professor Joseph A. Thas of the University of Ghent, Belgium. Professor Thas has been a Full Professor at the University of Ghent since 1970. He has published 5 books and over 150 papers, is a member of the Belgium Academy of Sciences, Letters, and Fine Arts (since 1988), and serves on the editorial board of various journals. Among other honours he has received the Scientific Louis Empain Award and the Francois Deruyts Award of the Royal Academy of Belgium. Professor Thas is recognized as one of the world leaders in the field of finite geometry. In his early work, among many original results, he extended the results of Segre on arcs and caps in PG(r,q) to spaces over matrix algebras. Since 1972, he has been heav
Post a Comment
Read more

November 21, 2019
From BICA (14) 1995: CITATION OF PROFESSOR CRISPIN NASH-WILLIAMS FOR THE HONORARY DEGREE OF DOCTOR OF MATHEMATICS AT THE UNIVERSITY OF WATERLOO  •••••••••••••••••••••••••••••••••••••••••••••••••••••• Crispin St.John Alvah Nash-Williams has been a leading contributor to combinatorial mathematics for thirty-five years. Beginning at a time when the subject was relatively undeveloped, he led the way in identifying important research problems, developing new techniques, and establishing the highest standards of rigour and integrity. His elegant and deep results have paved the way for many of the key developments in recent years. Professor Nash-Williams is especially recognized for his work on infinite graph theory. He has provided answers to many fundamental questions in this area. including existence of Hamiltonian and Euler paths, existence of transversals, and the problem of reconstruction. Perhaps most notable are his contributions to the theory of well-quasi-ordering, which not only e
Post a Comment
Read more

Frank and the Hyena

November 14, 2019
From BICA (13) 1995 Frank and the Hyena* • This article represents a "roast" that was given in honour of Professor Harary at the 255th Anniversary of Graph Theory conference in Durban. Usually roasts are restricted to Politicians, but Frank's prominence propelled him into the roast circuit. Good evening, ladies and gentlemen. It is a pleasure and an honor to introduce Frank Harary, our evening's distinguished speaker. No praise would be too much for this gentleman. No reward, for his accomplishments, would be too great. Rather than bore you with details of his uncountable achievements, I'll restrict my remarks to an event to which I personally witnessed several years ago. There are many false rumors about this episode, and they seem to be growing at an exponential rate. Further, our good colleague is too humble and modest a man to speak of them himself. So, I hope during this time we can clear the record. The problem came when Frank fell asleep during one of h
Post a Comment
Read more 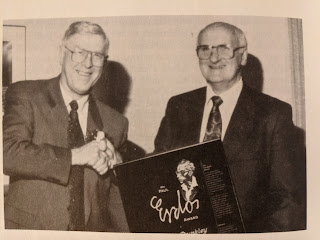 From BICA (13) 1995:  Peter O'Halloran (right) presenting an Erdös award to Ron Dunkley. One of Peter's last official acts. Photo from BICA (13) 1995. PETER O'HALLORAN A PERSONAL TRIBUTE R.G. Stanton, University of Manitoba Early in September, 1 was talking on the telephone, from the University of Leeds, with Peter O'Halloran at his home; he was his usual cheerful self, but it was evident, from his coughing, that he was extremely unwell. When Peter Taylor sent me an email later in the month that Peter had died, I felt a deep because the mathematical world has lost a man who could still have contributed a great deal. But we can all be very proud of the enormous impact that he has had on Australian mathematics and, indeed, on world mathematics. My own feeling is that Peter O'Halloran contributed more to the development of mathematics in the past 25 years than any other single person. Those of us who write research papers typically publish results that are read b
Post a Comment
Read more
More posts