Showing posts from April, 2019
Show all

Dr. Fan Chung awarded the 2017 Euler Medal of the ICA 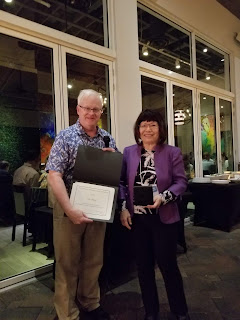 Euler Medals recognize distinguished lifetime career contributions to combinatorial research. Dr. Fan Chung has conducted research across a wide range of problems in theoretical and applied combinatorics. She has published around 275 papers, principally in graph theory, algorithm analysis, probability, communications networks and computation. She has been awarded numerous international honours and recognitions, including being presented the Allendoerfer Award of the Mathematical Association of America for expository excellence in 1990, giving an invited plenary address at the International Congress of Mathematicians in 1994, and giving the Noether Lecture of the American Mathematical Society in 2009. She is a Member of the American Academy of Arts and Sciences, and a Fellow of the American Mathematical Society and of the Society of Industrial and Applied Mathematics. She has supervised a large number of doctoral students, and has contributed to the math
Post a Comment
Read more

Dr. Alexander Bors awarded the 2018 Kirkman Medal of the ICA

April 18, 2019
Kirkman Medals recognize excellent research by Fellows or Associate Fellows of the ICA early in their research career, as evidenced by an excellent body of published research . Dr. Alexander Bors has made outstanding contributions to the understanding of combinatorial and quantitative problems on finite groups. He addresses fundamental theoretical questions, some of which are motivated by practical applications. He seeks characterizations that support efficient algorithmic decidability.  His PhD work has earned him several awards, namely an “Award of Excellence – Austrian state prize for the best dissertations 2016”, the “Hans Stegbuchner Prize 2016” for outstanding mathematical theses at the University of Salzburg, and the “Studienpreis” of the Austrian mathematical society for the best PhD thesis in mathematics completed in Austria during the year.  Dr. Bors has already published eight substantial articles, all but one single-authored. His nominato
Post a Comment
Read more

April 11, 2019
Honorary Fellowship in the Institute of Combinatorics and its Applications is awarded to an individual who has made pre-eminent contributions to combinatorics or its applications . Dr. Carsten Thomassen is one of the most influential graph theorists of our time. He was a Founding Fellow of the ICA, and a member of the ICA Council for 25 years (1990-2015).  In his long and distinguished career, he has authored or co-authored over 230 publications, including the frequently cited book  Graphs on Surfaces  (with B. Mohar). He has been Editor-in-Chief of the Journal of Graph Theory since 1989, and for decades has served on editorial boards of several other combinatorics journals of the highest rank. For his pioneering work in graph theory and profound influence in the area of combinatorics he has received numerous awards and recognitions, of which we mention just a few. He has been a Member of the Royal Danish Academy of Sciences and Letters since 1990, and was
Post a Comment
Read more
More posts