Showing posts from May, 2021
Show all

Dr Chong Shangguan awarded the 2020 Kirkman Medal of the ICA 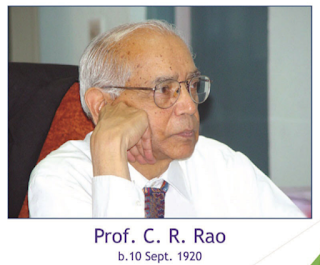 C. R. Rao was born on  September 10, 1920, in  Huvina Hadagali, India.  He earned several degrees:  M.A. degree in mathematics at the Andhra University in Waltair, Andhra Pradesh (1941), with first class and first rank. M. A. degree in statistics from Calcutta University in Kolkata, West Bengal (1943), with first class, first rank, and record marks unbeaten till now; further with a gold medal. Ph.D. at Cambridge University, UK (1948). Sc.D. by peer review of published work, Cambridge University, UK (1965). He is most famous for his work in statistics, but he did make major contributions to design theory.   Between 1952 and 2001, he had 51 PhD students and while many are statisticians, several are design and graph theorists. He was elected an Honorary Fellow of the ICA with the citation "as the world's leading expert in statistical design theory" in 1995. In September 2020, the Indian Statistical Institute Retired Employees' Association Pays Homage to Professor C. R.
Post a Comment
Read more

Combinatorialists in the news

May 13, 2021
https://www.quantamagazine.org/mathematicians-answer-old-question-about-odd-graphs-20210519/ Mathematicians Answer Old Question About Odd Graphs A pair of mathematicians solved a legendary question about the proportion of vertices in a graph with an odd number of connections. For decades, mathematicians have debated a simple question about graphs and the number of connections they have. Consider a graph G and a subgraph H such that all the vertices of H have odd degree.  The minimum size of such an H is now known.  Now, using arguments an undergraduate math student could have come up with,  Asaf Ferber  of the University of California, Irvine and  Michael Krivelevich  of Tel Aviv University have finally provided the answer in the form of a proof  posted in March .
Post a Comment
Read more

May 06, 2021
http://www.fields.utoronto.ca/activities/21-22/Stinson66 Stinson66 - New Advances in Designs, Codes and Cryptography June 13 - 17, 2022 ,  The Fields Institute Description This conference will celebrate Doug Stinson’s 66th birthday and highlight his contributions to the fields of designs, codes, cryptography, and their connections. The goal is to explore recent developments, open problems and conjectures in combinatorial design theory along with applications to related areas including codes, cryptography, networks, and algorithms. We intend to bring together leading researchers from around the world, along with graduate students, postdocs and other early-career researchers. The conference will consist of invited talks only and will provide ample opportunity for discussion and collaboration among the participants.
Post a Comment
Read more
More posts