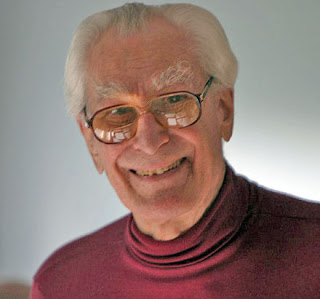 
Richard Kenneth Guy (30 September 1916 – 9 March 2020) was a British mathematician. He was a professor in the Department of Mathematics at the University of Calgary. He is known for his work in number theory, geometry, recreational mathematics, combinatorics, and graph theory. He is best known for co-authorship (with John Conway and Elwyn Berlekamp) of Winning Ways for your Mathematical Plays and authorship of Unsolved Problems in Number Theory. He published more than 300 scholarly articles. For this paper he received the MAA Lester R. Ford Award.

Guy is known for finding the crucial “glider” in John Horton Conway’s Game of Life, a universal cellular automaton that produces rich complexity from a very simple rule set—the glider was a wiggling, skittering animal, of sorts, gliding its way diagonally across the Life board. And Guy contributed to the canon of mathematical folklore with a tongue-in-cheek paper, published in 1988, titled, “The Strong Law of Small Numbers,” wherein he cautions: “Superficial similarities spawn spurious statements. Capricious coincidences cause careless conjectures…”

He is perhaps most famous, however, for posing problems—not so much solving problems (he does that, too); rather collecting and curating problems, with signature perspicuity, and propagating them in books such as Unsolved Problems in Number Theory. “Erdős was the main inspiration,” Guy told me. First published in 1981, the third edition is still in print. “You can tell a mathematician by the questions they ask, not by the answers they give,” said Andrew Granville, of the University College London. “Some of Erdős’s questions that I’m sure Richard collected over the years I thought were quite daft when he asked them, but they turned out to be exactly the right questions.”