The Stanton Medal honours significant lifetime contributions to promotingthe discipline of combinatorics through advocacy, outreach, service,teaching and/or mentoring. At most one medal per year is to be awarded,typically to a Fellow of the ICA. Nominations can be made by at least twoFellows of the ICA by providing a curriculum vitae for the nominee, and aletter of nomination that establishes the significance, duration, andimpact of the nominee’s contributions other than research. 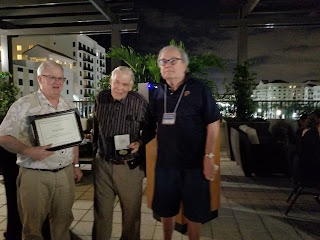 
For fifty years, Ron Mullin has been a leading citizen of the combinatorics community.  In addition to his exemplary research career, Ron’s contributions have been extensive as co-founder of one of the longest running combinatorial conferences; cofounder of a leading journal; managing editor; textbook author; and co-founder of a company engaged in cryptography. As Professor and Chair of Combinatorics and Optimization at the University of Waterloo and as President of the ICA, his focus on fostering and supporting international collaborations has also had substantial positive impact. His mentorship of students and colleagues has launched many successful careers in combinatorial design theory, statistics, and cryptography.  Ron is a modest man, who works tirelessly to support and advance combinatorics. As his nominators say, Ron is ``one of those rare persons of extreme intelligence, love of knowledge, passion for mathematics, and the ability to transmit mathematical excitement to students and colleagues alike.’’