Obituary: Frank Yates
May 12, 1902-June 17, 1994
It is impossible to summarise the research achievements of one of the great statisticians of this century in a brief obituary. The Times (Saturday, June 25, 1994) spends half of its space in giving an account of the work Dr Yates did during the War in analysing the strike patterns of V-ls around London so as to identify the sites being targeted, and thus aid in the deployment of interceptor fighter squadrons. A better insight into the enormous impact of the work of Dr Yates is provided by the article F.Y.-A Personal Note, by M.J.R. Healy (Utilitas Mathematica, 21A, 1982, 3-12); this article introduces the two special volumes that were published on the occasion of Dr Yates's 80th birthday.
Healy's article shows the enormous contribution that Yates made to experimental design and to the analysis of design, as well as his later major contributions to sampling and to the use of computers in statistical analysis of designs.

Although Dr Yates modestly argued against any claim that he was a combinatoricist, he and Sir Ronald Fisher had an enormous influence on the development of 20th century combinatorial design. Yates introduced the concept of the Balanced Incomplete Block Design (personal communication from Sir Ronald Fisher), and this fact has been recognised in several recent combinatorial books. Following a suggestion from Fisher, Bose did his fundamental work on applying finite fields to BIBDs; and Yates commented wryly that later workers turned the matter into a business. Much of the work in combinatorics in the last fifty years derives from developments, extensions, and analogues of the early work on BIBDs.

Yates received many honours including a Fellowship in the Royal Society (1948), and an honourary doctorate from the University of London (1982). He served as Honorary Editor of Utilitas Mathematica from its inception in 1972 until his death in 1994. His work on the use of statistical design in agricultural research was a fundamental contribution to statistics, and the prominence of design in combinatorics today stems from the impetus given by his initial work on statistical designs.

Frank Yates was a gruff but kindly person who was very helpful to a great many younger research workers. An idea of his influence can be obtained by looking at the papers Working with Frank Yates on RGSP (M.C. Pearce), Working with Dr F. Yates (P. Rundell), Collaboration with Frank Yates-A Personal View (Paul A. Tukey), and Working for a Year with Frank Yates (Margaret P. Wood). These papers appeared in Utilitas Mathematica 21B, 1982, 369-381.

Frank Yates always enjoyed an animated discussion and was particularly incensed at any errors in statistical history. I can recall an incidence at the University of North Carolina where a conference speaker had attributed to Sir Ronald Fisher "the invention of errors of the second kind" (this was after Fisher's death). At the close of the talk, Yates leaped to his feat in order to disclaim emphatically the attribution of errors of the second kind to Fisher!

It was probably particularly appropriate that, at the simple memorial service for such an energetic and creative researcher, the hymn played should have been "Fight the Good Fight". With the death of Yates, an era has ended and the world is poorer by the passing of one of the great men of the century. 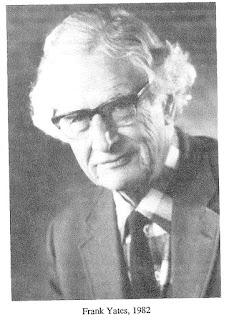