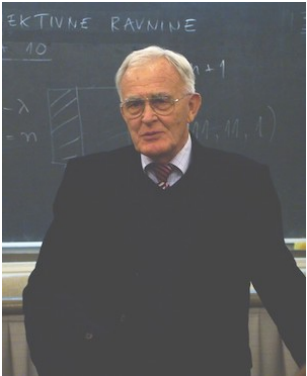 With a deep sense of loss we would like to communicate that the world famous Croatian mathematician Zvonimir Janko passed away on April 12, 2022. He made a great impact to finite group theory and combinatorial design theory. Professor Janko was not only an expert but a nice and generous person as well, always willing to help. As such he will be overwhelmingly missed by his former students, colleagues, friends and family.

Zvonimir Janko was born on July 26, 1932, in Bjelovar, Croatia. He studied mathematics at the University of Zagreb, Croatia. After graduation he taught physics at a high school in Siroki Brijeg in Bosnia and Herzegovina, ˇ where he met his future wife Zora. He earned his PhD at the University of Zagreb in 1960. In his thesis, entitled Decomposition of some classes of nondegenerate R´edei Groups on Schreier extensions, Zvonimir Janko solved a problem posed by the Hungarian mathematician L´aszl´o R´edei.

Switching to design theory, Zvonimir Janko was mostly interested in proving the existence of certain combinatorial structures. He proved, sometimes in collaboration with Tran van Trung, the existence of symmetric designs with parameters (70,24,8), (71,21,6), (78,22,6), (189,48,12) and (105,40,15). Further, together with Vladimir Tonchev he proved the existence of a (nonsymmetric) 2-(175,7,1) design. Moreover, together with Hadi Kharaghani and Vladimir Tonchev he proved the existence of Bush-type Hadamard matrices of order 36, 100 and 324, which lead to construction of infinite series of symmetric designs and strongly regular graphs. Willing to be confronted 51 to the greatest problems in mathematics, Zvonimir Janko investigated the possibility of the existence of a projective plane of composite order as well.

Zvonimir Janko was working in design theory for about 20 years when he returned to his first love, that is, group theory. In the 2000s, he started to study groups of prime power order. His work on p-groups and collaboration with Yakov Berkovich resulted in a large number of papers together with volumes 2 to 6 of the monograph series Groups of prime power order. Janko was always willing to work with students and share research problems with them. According to the Mathematical Genealogy Project, Zvonimir Janko had 18 PhD students and 87 descendants. He was a corresponding member of the Croatian Academy of Sciences and Arts, and a member of the Heidelberg Academy of Sciences. In 1970 the French Academy of Sciences decorated him with a medal for the discovery of sporadic groups.

Zvonimir Janko was deeply devoted to his wife Zora, who sadly passed away in 2019. They are survived by their two children, Boris and Antoinette.

April 05, 2018
4th Annual Kliakhandler Conference  Graph Decompositions  August 9-11, 2018  The 4th annual Kliakhandler Conference will be held August 9-11, 2018 on the campus of Michigan Technological University. The focus of the conference this year will be on graph decompositions. Graph decomposition problems regularly appear in the fields of graph theory, design theory, and algebra and have applications to communication, optimization, and algorithms. The conference will consist of a mix of plenary talks and contributed talks. The conference will also include a special session titled “Everyday Combinatorics”, which will focus on combinatorics at the high school level. A combinatorics specialist with an interest in math education will organize the session, and local high school teachers will be invited to attend the session. Conference Website: http://kliak.mtu.edu/ The university is located fifteen minutes from the Houghton County Memorial Airport (CMX). It is also two hours by car
Read more