Anne was a Founding Fellow of the Institute for Combinatorics and its Applications, and an editor of the BICA from 1991 to 2014. 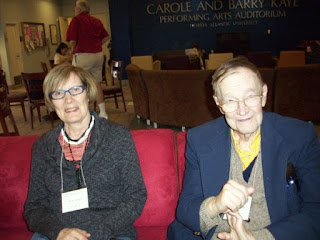 Picture of Anne Street and Ralph Stanton from Boca conference in 2009.

Anne was a student of Michio Suzuki and received her PhD at University of Illinois at Urbana-Champaign in 1966 with dissertation "Subgroups Determining Functions on Groups."

The Australian Mathematical Society has an award named after her, in recognition of her contributions to the advancement of knowledge across the broader mathematical community where she promoted the intellectual development of secondary and tertiary students, and actively supported the advancement of her peers. She was appointed Professor of Mathematics at The University of Queensland in 1985. She was the third woman appointed to a mathematics professorship in Australia, after Hanna Neumann, ANU 1964, and Cheryl Praeger, UWA 1983.
Professor Street's significant service to science education in the field of mathematics was recognised through her appointment as a member of the Order of Australia in 2014. Her contribution to tertiary education has gone well beyond that of a university faculty member. For many years she was an active member of the Australian Mathematics Trust, providing leadership on enrichment programs for secondary students such as the Mathematical Olympiad. The importance of Professor Street's contributions was acknowledged by the award of the 1994 Bernhard H. Neumann Award for excellence in mathematics enrichment. Her contributions have also been recognised through the award of the Inaugural Medal for Outstanding Service, Combinatorial Mathematics Society of Australasia, 1999, an ARC Australian Senior Research Award, 1991, and a D.Math. (honoris causa) from the University of Waterloo, 1996.